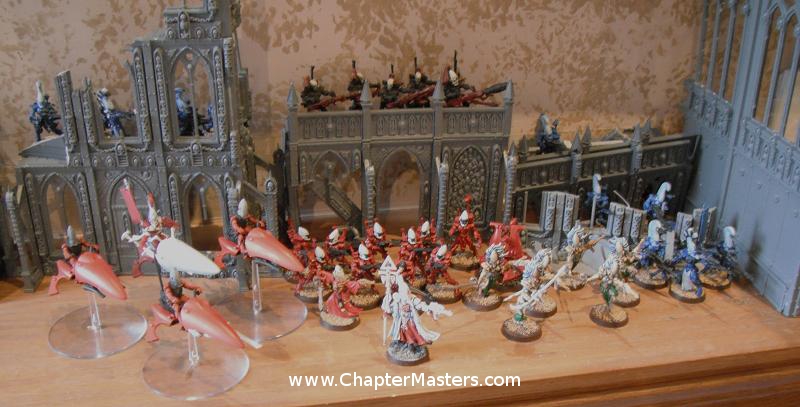 This small Eldar army just makes 1000 points. The HQ is an improvised Autrach using a plastic dire avenger model on a jetbike. A Metal Farseer adds a second HQ and psychic support. The troops section is formed by two Dire Avenger squads, a five man squad with plastic Exarch and a 6 man squad using the old metal exarch (in the ruins). A 10 man (or woman) Guardian squad with a Star Cannon and Warlock makes a third troop choice and a 3 man jet bike squad makes up a final troop choice. The Heavy Support consists of a five man Dark reaper squad with Exarch, these are good anti marines weapons with their AP3 reaper launchers. The Exarch has a Missile Launcher to add some anti tank support, which this army is not strong on. Finally the Fast attack section comprises of a 6 woman Howling Banshee adding their close combat ability 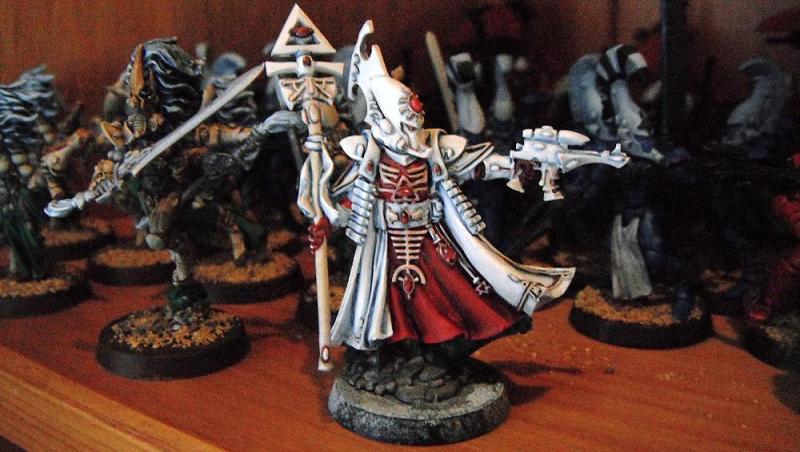 A Farseer with Witch Staff and Shuriken Pistol is an essential unit for the Eldar. The Fortune and Guild powers can be used to bolster the abilities of either the dire avengers or Guardians. This model was given a white undercoat. Blue ink has been painted into the recess to create shading. The red is a Merchant Red Scorched Brown mix, worked up with Beached Bone.

This Eldar army has been painted as quickly as possible to get to a game worthy state. These models have been given a black undercoat and then sprayed with skull white from a high angle to create light and shadow. The guns were painted with gold and then given a brown wash along with the white armour. Their hair was given a blue wash. I guess these are old girls as they have a blue rinse. The swords have been painted with chainmail and washed with black. The sashes were painted green and then given a green wash.