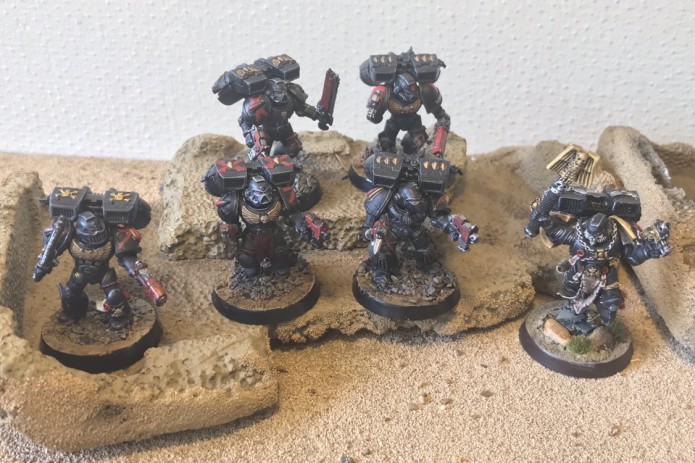 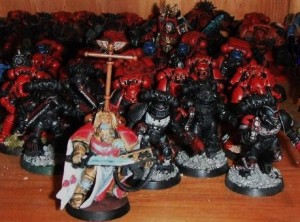 This army is still in the process of being painted it started with a 1000pts core for later expansion. A black reach Captain was the original leader for this force. A limited Space Marine Captian with Thunder Hammer and Terminator model from Space Hulk now sever as alternate models. The death company were built using the new plastic legs and old metal shoulder pads along with a spare helmet from the Venerable Dreadnought kit, then had a jump pack upgrade Two 5 man tactical squads formed the core units of the army lead by an out of production Sargent in oop metal MK8 power armour. A five man devastator squad armed with Missile Luncher, Lascannon, Multi-melta and heavy bolter added a versatile heavy support option. A five man terminator squad made from the limited edition space hulk squad forms a elite choice. A second five man tactical squad added a 2nd troop choice with an old out of production Blood Angles Sergeant model. The Limited Edition Space Hulk Librarian adds a second HQ option and Psychic support. 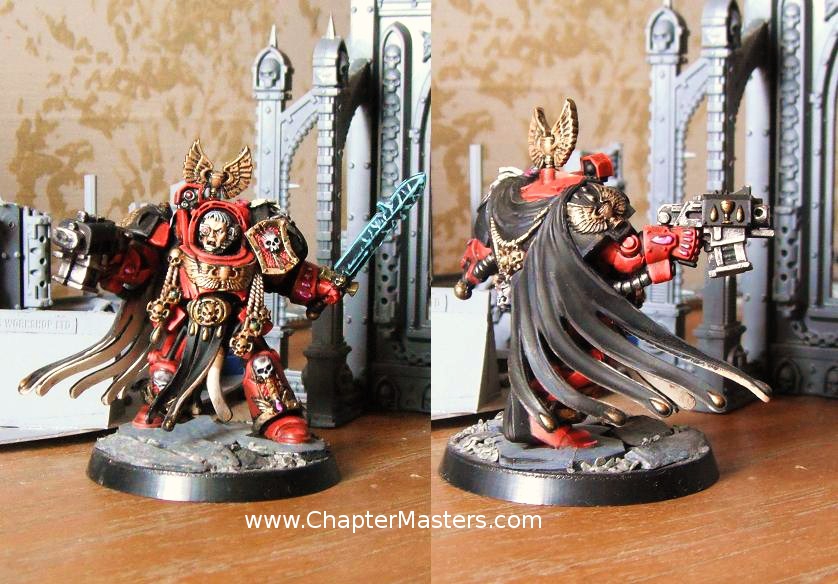 This limited edition Space Hulk Sergeant model took a lot of time to paint. It could really still do with a bit more work. I intend to come back and add a bit more detail to the armour. The many layers of shading don’t really show up well in this photo. The lighting effect on this sword didn’t really work so I may have another go at them. The bit I’m most pleased with is the base which is just the normal stand drybrushed with codex grey and has had slate glued on around it.

This Tactical Squad has had a few minor tweaks. The Sergeant is an old MK8 Power armour marine complete with metal MK8 arms a new Bolter, targeter and purity seals have been added. On the back row are two MK6 marines. One is armed with a melta gun the other is with a Missile Launcher both have original plastic MK6 torsos.

This is the original Blood Angels Sergeant model from Rogue Trader/Second Edition. I picked up this model fairly recently. Games Workshop have discontinued both the old Blood Angel Sergeants. The other old model which came with the devastator squad has one of the thin helmet vents, they don’t appear to like selling these. I’m not sure why this one got the chop. It is a little shorter than new models but I intend to put it on a raised base to get over that.

This Death Company Squad is made from a Assault Marines with mix of the new Death Company plastic legs the leed model has a spare helmet from the Venerable Dreadnought kit. Some old metal blood angel shoulder pads have also been used. The armour has been painted black and highlighted with a single grey mix. The red is foundation red with blood red highlights. 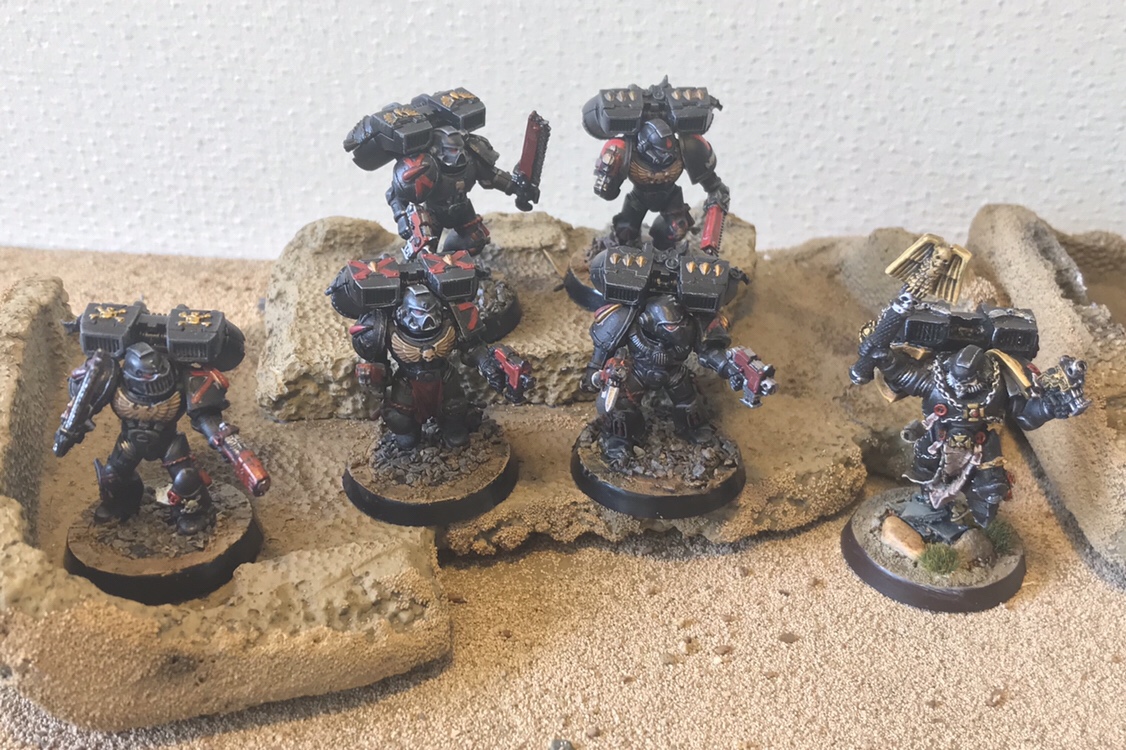 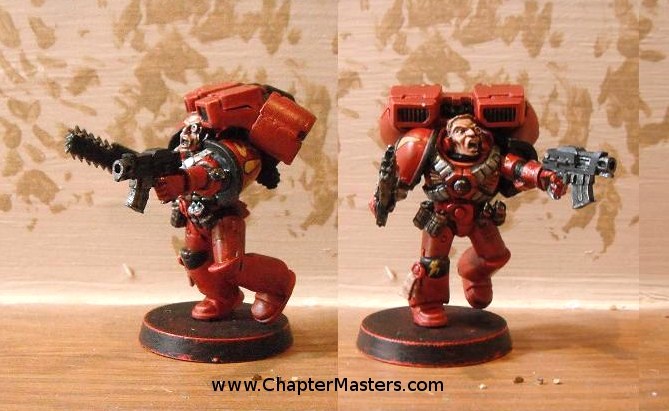 This Sergeant for my Assault Squad is made from the standard Assault squad model with MK6 legs. The head is from the Death Watch conversion kit, the weapons are from the Forge World Mk5 Assault squad. Mk4 knee pads have been painted onto the legs. Unfortunately the highlighting doesn’t show up very well in this photo. There are four more models in this squad but they are only base coated at the moment.

Update they are finished now, well almost. I’ve recently taken a break from the Terminators to rebase these Assault Marines, using some 2 part 32mm upgrade pieces. With over 400 space marines in the collection rebasing every model, isn’t very high on the hobby list. The one place where I’ve always wanted bigger bases is on Assault Marines, or those with jump packs anyway. So I’m happy to do these.

You can’t miss the MkV helm in this squad. I love how the yellow helmets of the Blood Angels show off the different styles of power armour. 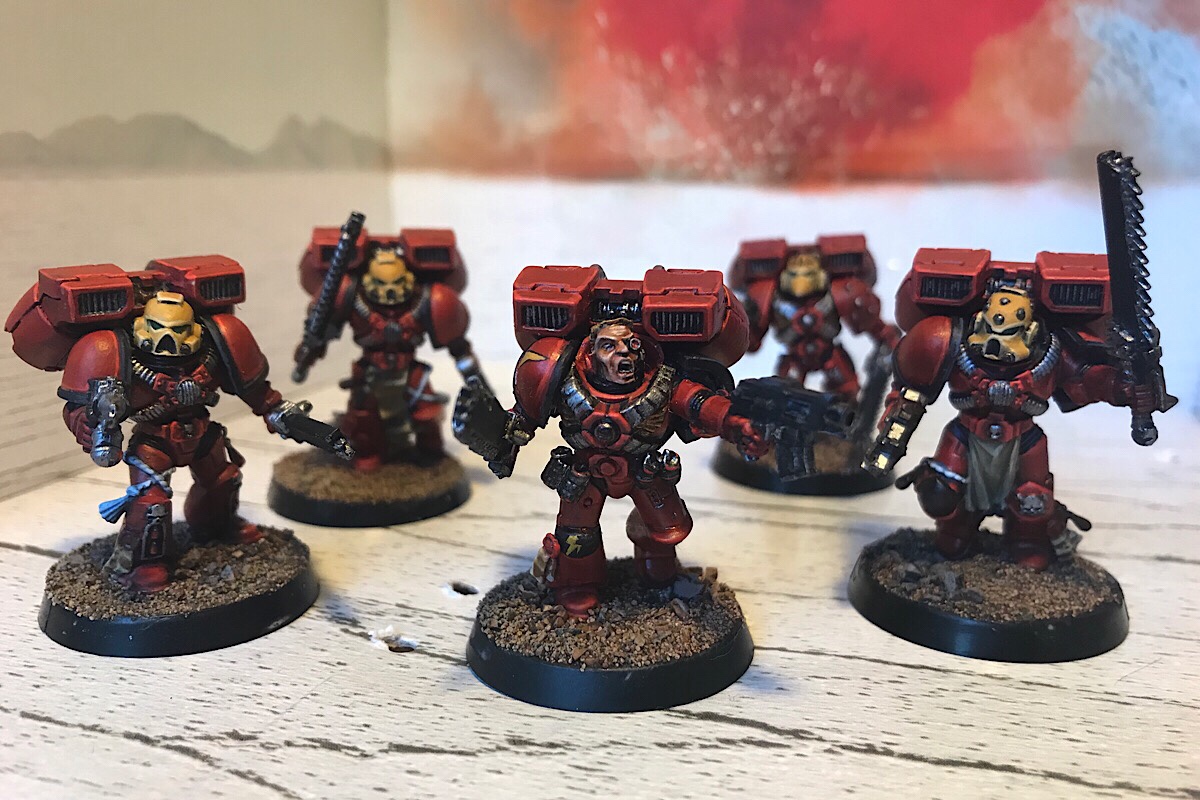 I have added couple more units to the Blood Angels recently. I’ll try to get better close up pictures added soon.