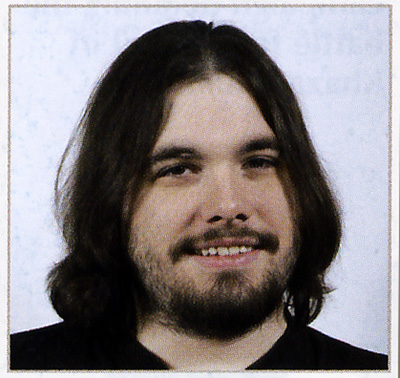 Ben and I spoke to a number of member of the studio at Games Day this year.

I spent a good while talking to Jarvis. We talked about a lot of the things he’s already writen about, Not getting too caught up on wining, being a good sport, not being afraid to just put some models down on the table and make the game work. I told him about a couple of games I had played with mates recently without army lists. One three way game with just walkers. Another was a wipe out game with about 4k of Nids against 2K of walkers.

I asked him how he felt 6th was playing and we discussed the need to get rules that both work smoothly and to support narrative. He said he still felt there were some units that don’t play the way they should according to their background. Tyranids were mentioned. He almost let some nuggets slip but very clearly had the view the point values were too high for some units, Geanstealers were mentioned, he said he didn’t want the design studio messing with the rules to balance them out just to adjust the points values. I got the impression he gets asked about Nids a lot.

He talked about random charge lengths and over watch – they haven’t really worked the way they hoped they would. He anticipated players being happy being able to charge up to 12″ but some players with close combat armies aren’t happy with it. I said that was probably the ones that had fleet already. Those that didn’t are better off now. He agree with this.

We discussed what happens at the end of a round of close combat. I talked about the problem of troop being exposed to the enermy if they wiped out there opponents and suggested some sort of intuitive test to  colsoldation into futher close combats.  He said he wanted to make combat even more decisive so it was ended each turn. Which obviously wasn’t what I hoped he would say.

The shock from Matt was he’d cut his hair and shaved off his beard which seamed to have stopped him getting mobbed. I more heard someone else talk to Matt than spoke to him directly. He also talked about the need to drop points values for some army’s Dark Eldar and Necrons having been done now, but some older codex’s are still not right although he didn’t think Tau really had a problem. He did mention Tyranids and Sisters of battle.

I asked him were he got the idea for Grey Knights to murder Sisters of Battle to rub their bones over their armour. He said he hadn’t got the idea from anywhere but had been told he needed to be more nasty with Grey Knights. He also said I was the 3rd person to mention it to him that day and said something to Robin Crudace about it. I said to both of them that I’d started a facebook group about it all. Both look horrified until I said I was joking.
I did ask Matt how much time my Space Marine codex would be useful for, he said he couldn’t possible comment. Read into that what you will.

I had a very brift chat with Jes. I talked to him about the armour through the ages box set for Space Marines and asked him if he had sculpted the Transistion marines and why the Mk6 transition Marines where never in a mail order catalogue. He said he has sculpted some of the transition marines, but didn’t remember doing any one piece MK6, although he admitted to sometimes forgetting what he had sculpted. He was sure he had done the one piece Mk5

I also spoke with another member of the sculpting team. His work included Scarius and Calgar I talked to him about how the standard plastic space marines were looking a little bit left behind by the space wolves and blood angels set’s; which incorporate more armour variants. He told me this was still their best selling line  but said “watch this space”. We also discussed how the nod to Mk8 armour in the current box set was not quite what MK8 armour should look like. He said they had wanted to make Mk8 armour even rarer than it had been. He also talked about how the circular part of the the inner leg Mk8 armour was almost impossible to mould in plastic. I asked him if he coudl tell me what he was working on and he said he couldn’t, so I started talking to him about the Forge world stuff. I asked if it was a guilty pleasure for the studio design team. He said it was more like something they could enjoy as “hobby” rather that work, I said I like the forge world stuff but preferred to buy a mix of armours type in one go rather than just one Mk. Again he said watch this space.

Get the best brush you can. Good quality with nice point
When highlighting sweep the model with a light strokes this helps to control the thickness of the lines. Thinner lines look better.
When adding colours on metal like purple on swords rather than add a couple of full strengh washes thin down the washes even further with medium and apply lots of coats to build up the areas you want to look stronger.
On faces go to extremes with hightlights and shadows and then apply washes afterwards to tone it all back down.

but Anya main comment to Ben was his technique was good and that the biggest improvement he could make was to take more time and be more careful with each brush stroke.

Ben was very happy with this feed back from the person he is alleged to have described as “the hotty of the Heavy Metal team”.

Anja has her own blog. http://ileftwithshakinghands.blogspot.co.uk/

That’s about all I can remember from the studio on what proved to be a great afternoon.