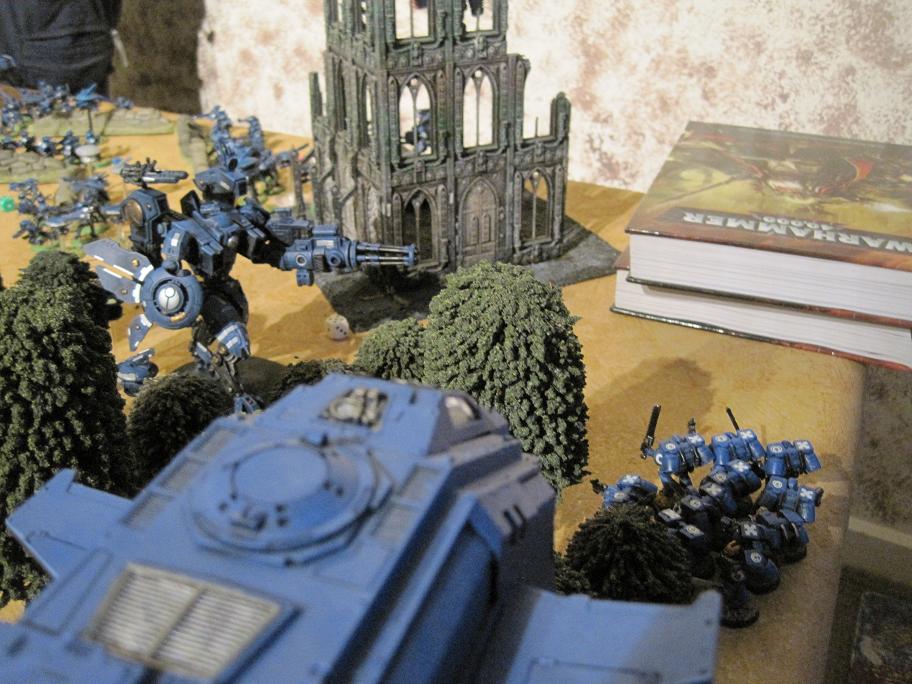 Reserves. Turn one is always a bit of a non event in games which have a lot of the forces held back. Turn two is when it get a bit more exciting. 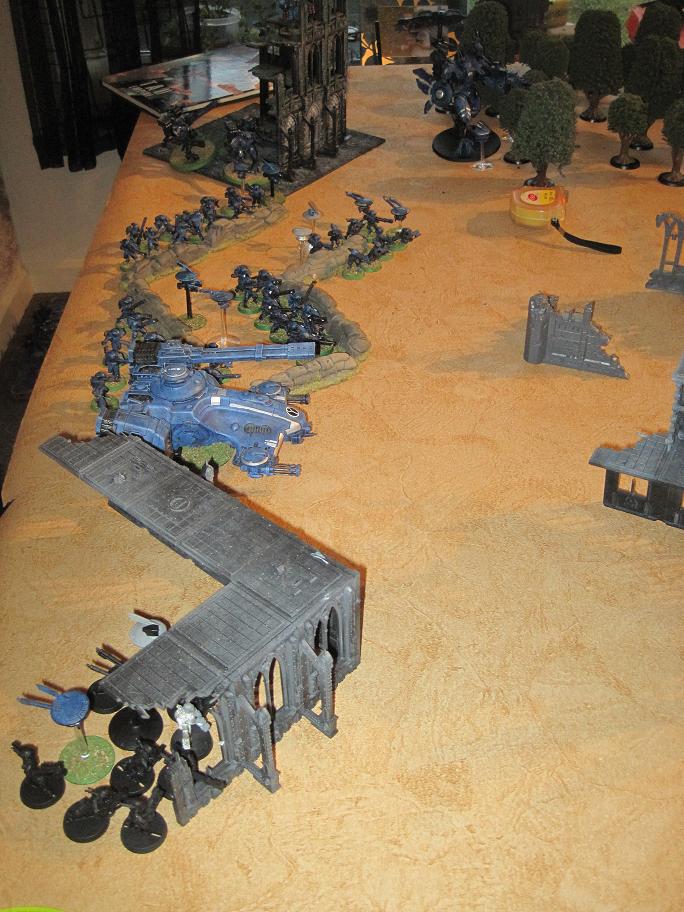 Unfortunately for me the Tau did rather well on their reserve rolls. Suddenly the game looked very one sided. The other pathfinders team,  both Fire warriors teams and a Hammerhead arrived on the battle field. At least there would be no shortage of targets for my guns. 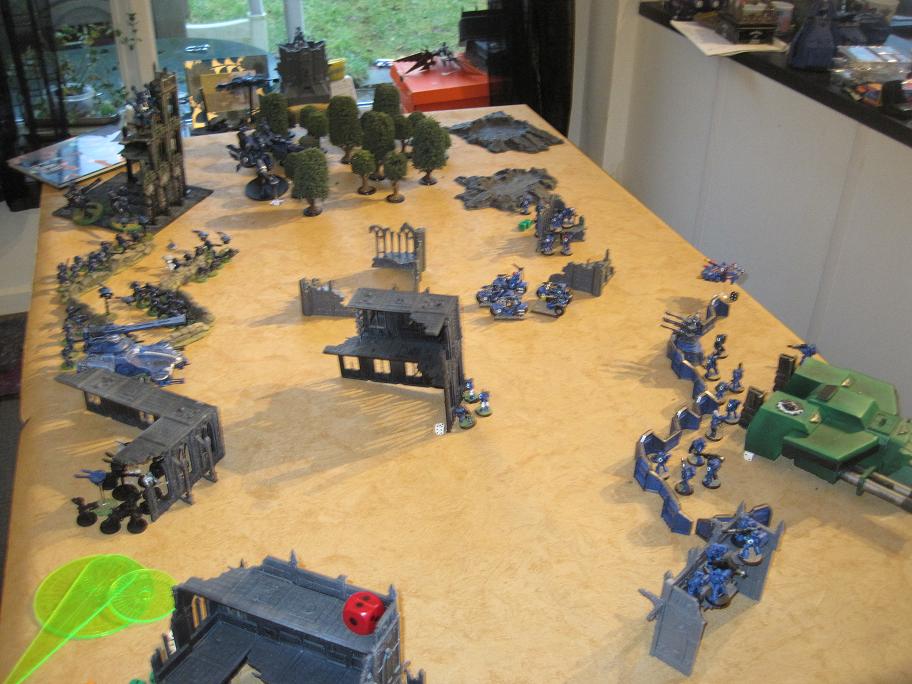 The Tau wasted no time in letting rip. The bile squad and scouts took the brunt of the the Tau Fire. Two more bikes were lost including the Sargent in Mk6 power armour. The Rip tide was a big contributor to the bikes demise. This left only the melta gun and multi melta (due to some careful placement in turn one). Two more scouts were killed leaving only the scout Sargent remaining. I was on the edge of my seat fully expecting one more failed save to result in 1st blood. If all the Tau fire-power had been directed at the scouts I’m sure this would have been the case. 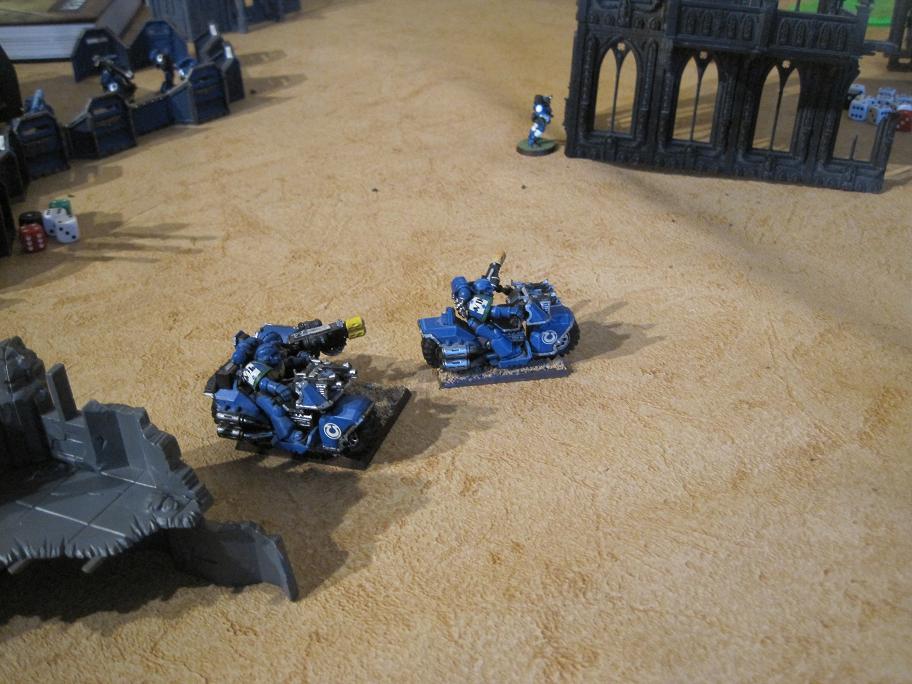 The Marine reserves did go quite as well. While all but 1 assault squad arrived, where things arrived caused more drama. I rolled deep strike for the assault squad 1st. Having never fought the “Tau empire” before I though a flank assault would be the best way to cripple them. Picking off the big guns with assault troops is the never a bad move. The Assault squad scattered almost off the table. The Storm Raven(which looks like a Storm Eagle) re-enforced the flank and eye up the biggest target on the board. 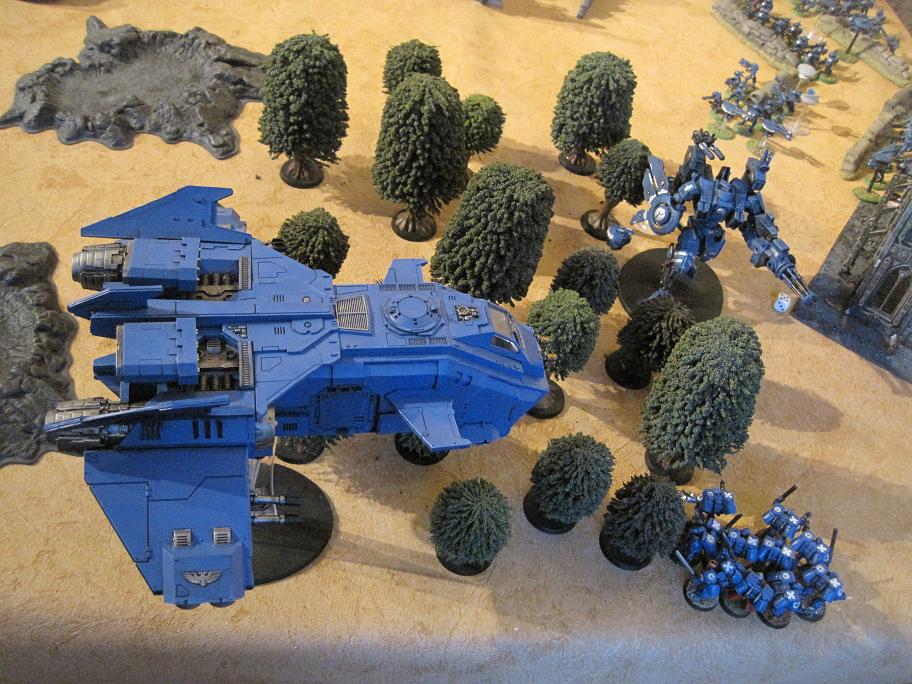 However the drop pod (forgotten on turn 1) did scatter off the table. If I had read it’s scatter rules before placing it I would have put it closer to the buildings. As it was the Tau player got to place it

right at the back of my deployment zone. 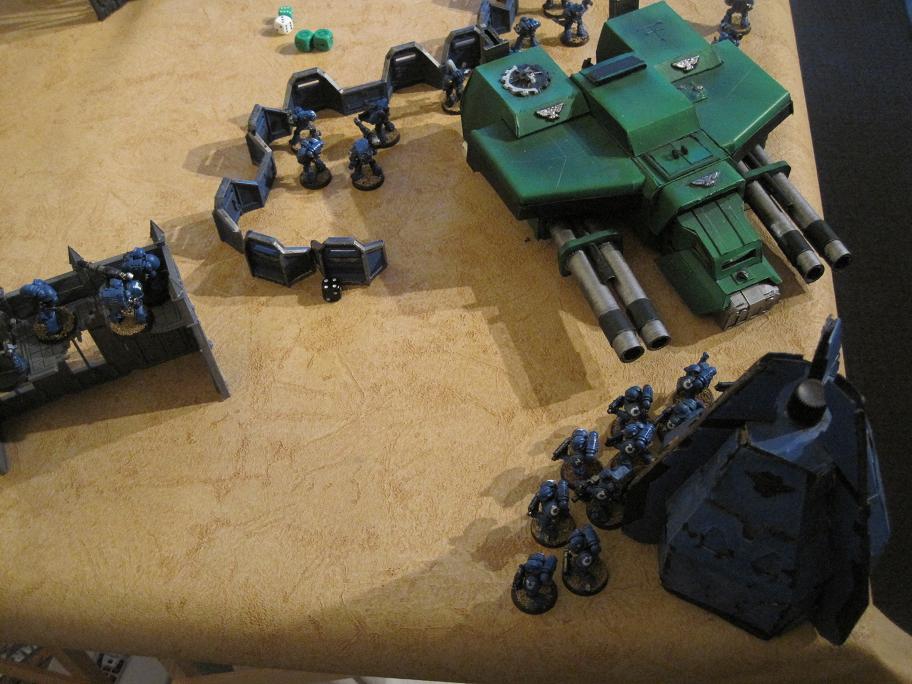 To make up for the Drop pods off target landing I pushed the other two tactical squads towards the Tau. As not to give away two victory points,  the sole scout sergeant retreated towards the safety of the Tactical Squad and agais line.

The Storm Raven targets the Riptide.

The shooting turn faired somewhat better, but not much. The Assault squad let rip at the Riptide taking off 1 wound. The Storm Raven elected not to shoot the Rip tide, as 4 shots were very unlikly to remove it’s remainging 4 wounds, even with added it’s 4 Strength 8+ attacks.  This judgement proved to be right as I inflicted 2 unsaved wounds on the Broadside team in the ruins, which due to instant death rules got me first Blood.  Due to some very bad dice rolls the the bike squad and land speeder, and marines with heavy weapons only managed to remove 1 hull point from the Hammerhead.

Update later in the shooting phase my opponent realised he’d forgotten to deploy his drones with his Broad sides. Being of good sport I let him put a broadside back on the board.