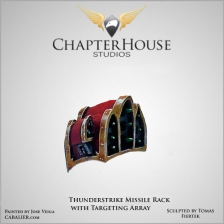 We thought it was all over, but it appears Chapterhouse haven’t given up on defending their models.

In response to a question on Bell of lost souls about if Chapter House Studios would continue to sell the Techmarine conversion beamer. Nick said “Put that item in the “weird and made no sense” jury rulings, I’m hoping it gets appealed successfully.”

This obviously indicates ChapterHouse intend to appeal the existing ruling, in part at least.

He cites the fact that when Chapter House started selling this Kit, Games Workshop where not selling any conversion beamers. They do now have the forge world kit.

Games Workshop did make a conversion beamer in the rouge trader days. If they sold this in the US, then they should then have a trademark for war games products with the name conversion beamer.

This shouldn’t stop Chapterhouse making something that looks different and given it a different name. Such as the Thunderstrike Missle rack, which is clearly meant to be an alternative to a cyclone missile luncher.

The Chapterhouse Studios conversion beamer, no longer available for sale.