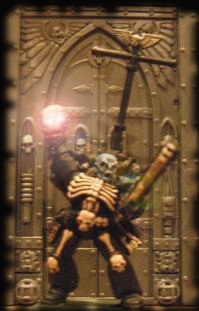 The Legion of the damned are not believed to have any formal chapter organisation. One figure has on occasion been witnessed to direct other squads and be accompanied by what some consider a body guard. Veteran Sergeant Centurius is believed to be the only Veteran Sergeant within the ranks of the Legion of the Damned. He carries an artefact that bears striking resemblance to the Animus Malorum, which belonged to ChapterMaster Stibor Lazaerek of the Fire Hawks Chapter. Some quote this as evidence that the Legion of the Damned is in fact all that is left of the Fire Hawks Chapter, some speculate that the Centurius found the artefact in the warp, other believe he came across it by far more sinister means.

I value feed back on this so please comment below or cast your vote.

ChapterMasters is completely unofficial and in no way endorsed by Games Workshop Limited.