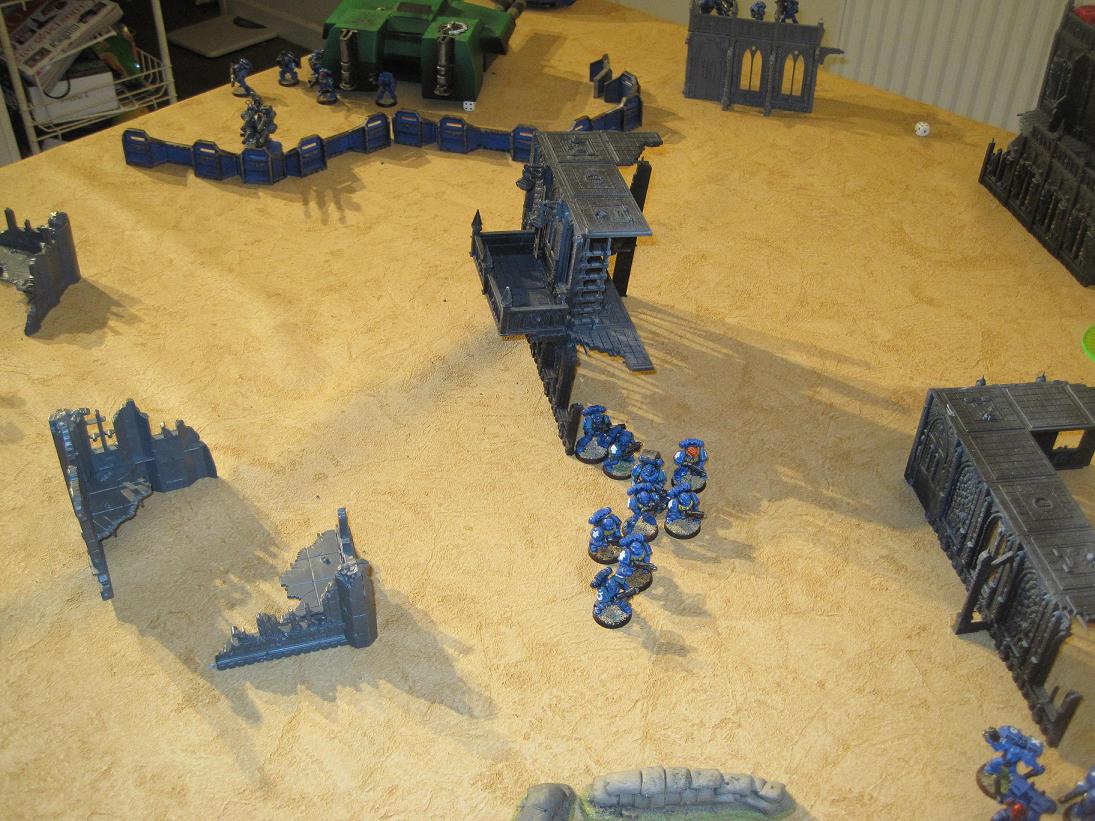 At last the end has come.

The Broad sides wasted no time in killing the Scout Sargent who had been adding a significant contribution to the Marines fire-power with the Quad gun. The Firewarriors and path finders also managed to take out the Tactical Marine with the Las Cannon bagging the Tau 2 more victory points. It was now 8-3 to the Tau!

Now it was time for the Marines to prove their worth. They had been gradually grinding down the Tau over the last few turns but hadn’t managed to bag many victory points in the process. The time had come to sell their lives as “ideally” as possible. The Storm Raven switched to cruse mode and moved up on the broad sides teams. The assault squad readied themselves for one final charge and the last Tactical squad moved to optimum rapid fire range. 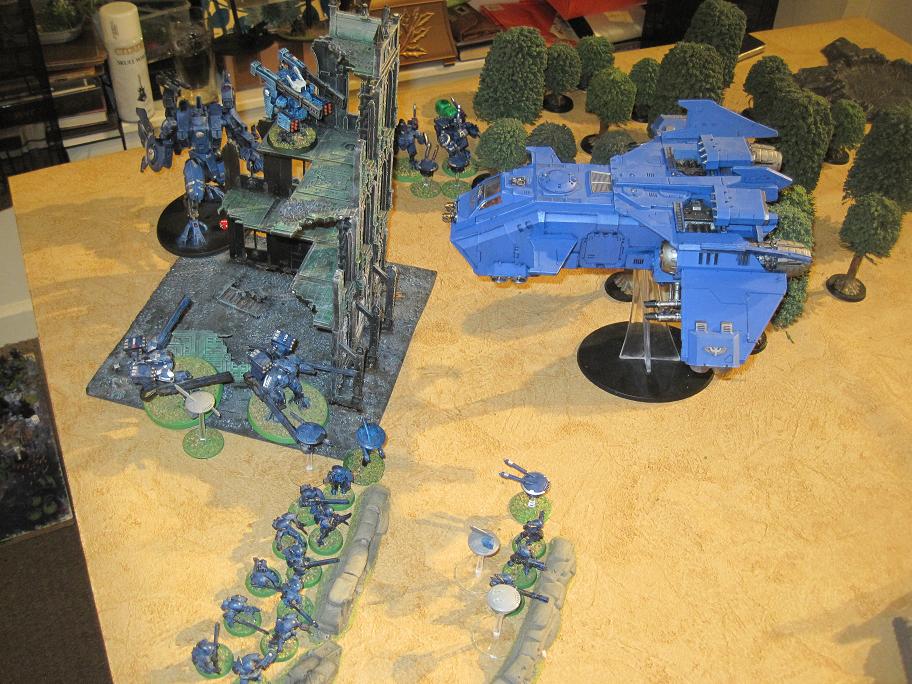 The volley of fire from the Space Marines was unmercifully  The Devastator combat squad finally killed the resurrected Broad Side. The other Devastator combat squad  cleared up the front Fire warrior team. The Tactical squads made a big dent in the rear Fire warrior team, who refused to break and run off the board (darn it!).  The Assault squad dealt with Strider and his pathfinders with a volley from their bolt pistols followed by an unstoppable assault. The Storm Raven Killed the other Broad side squad. Leaving only a handful of Tau on the board.

The kill point total was now 6 to the Tau and 6 to the Marines. The Tau had achieved First blood and Kill the warlord, while the marines had achieved line breaker with the assault squad and storm raven. Finally Victory point tally Tau: 8 Marines: 7

If the game has been able to continue into turn 8, I suspect the Storm Raven would have been shot down. The Assault squad would have cleared up the remaining fire warriors. Leaving the Tactical Squad and Assault Squad up against the Rip Tide and Crisis team in turn 9. If the Devastator had range to support the conflict I suspect the Space Marines would have won. If the Tau could have picked them off one by one it should have gone to the Tau.

There were a couple of issue with the battle, which is normally the case when using a new codex; in in my cases the 100th. One was the Broad side who came back from the dead due to the forgotten drone.  The other was Strider over watching and then retreating 3D6 instead of D6. The Tau commander described himself as a numty and conceded the game should not have been won by the Tau. If we take it that the Boardsides did die, the Victory point for 1st blood would be the Space Marines and make the final score 8-7 to the Marines.  Of course the Marines were not without error, forgetting to deploy the Drop pod on Turn 1 and I think there were a couple of times I forgot to snap fire heavy weapons that had moved at BS1.

I think the Space Marines biggest mistake was deploying too far back and then the stupid high risk flank assault on the Tau’s strongest side. If more of the Marine forces had been committed to the Tau’s weaker flank the game might have been very different.

I think the Tau biggest error was not responding to the reverse flank manoeuvres and allowing the marine player to pick them apart squad by squad. Deploying the Riptide on the other flank and laying into the Tactical Squad might  have been much more effective. The Crisis team could have dealt with the Assault squad on their own. The other mistake the Tau player made was committing too much fire-power to the Storm Raven, some times it better to leave the white elephant to get on with wreaking the china shop. The Devastator squad proved pivotal at the closing stages of the game. Given then were only 5 man squads two victory point could have been awarded for taking these out.