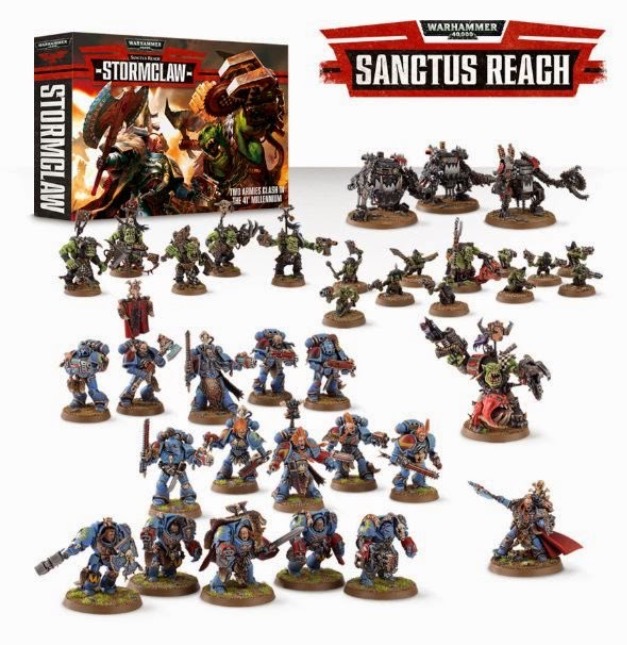 Have you noticed how Games Workshop are putting out these extremely cheep two army battle sets in addition to the Dark Vengeance starter set? You probably tried to order Storm Claw and are currently thinking about ordering Shield of Baal, if you can be bothered to stay on the website on Friday pressing the refresh button. Although the sets comprise of some of the less popular units in the game they do represent great value for money and also contain limited edition models as well as a small rule book which has a resale value of 1/3 of the total set price. More to to the point the sets contain two, all be it very small armies. Both weigh in at around the 400 point mark similar to Dark Vengeance and just like Dark Vengeance neither would have been legal in 6th edition as one of the squads is an elite unit not a troop choice. Due to unbound armies under 7th edition it is possible to buy smaller armies using units which have higher points to goblin unit (dollar, pound, euro) values. For example Vanguard Veteran Squads which can be tooled up to over 300 points using all the wargear in the box, while the unit only costs the same amount as a tactical squad which only gets you around 150 points.

Don’t get me wrong I’m not saying this is a good idea from a competitive point of view, but Games Workshop don’t often throw us a bone. At the moment they appear to be throwing out many. Cheap army starter sets, more flexible army construction, no basic price rise for two years in a row, soft cover codex. (allegedly – disgusting rumours spit hiss). I think some times we get so up in arms at the blunders made by games workshop, the increasing expense of their books, which lets face it we feel obliged to purchase for fear of looking cheap and their increasingly expensive new models, when the cost of plastic and moulding techniques have been falling, the accelerated release pace of army books and the core rules which again are enforced purchase items if you want to keep gaming and let not forget that big old Nurf Bat, which I think is the single biggest reason gamers quit the hobby (you mean this army I’ve spent 2000 bucks on isn’t any good now what? Why would anyone want to keep playing your hobby which continues to kick you in the face for being dedicated. Let’s not forget the rules for playing large games, which actually make the games slower??? In the face of all this, do we miss some of the good stuff? Are we seeing a new strategy from Games Workshop in the face of their falling sales numbers and share price? Have Games Workshop started to understand they are not operating in a monopoly or global economic boom? It appear they may have.