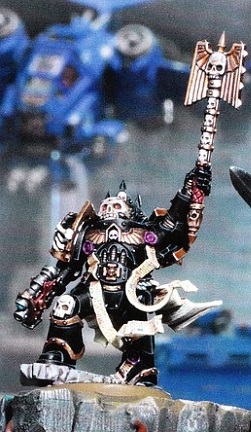 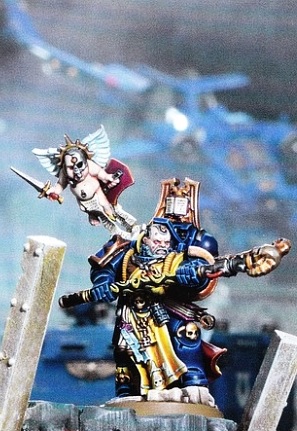 Unlike the Space Marine Captain there is a need for this model. If you’re anything like me you have a bunch of Librarians, but not enough for a Cohort. Games Workshop didn’t need to pull out all the stops on this one in order to get us parting with our money. With the  exception of the fat thing on it’s shoulder pad I love this model. The good news is you don’t have to use the flying infant cyborg.  This Librarian is unlike any other GW have produced. Just like the Captain this model provides excellent detail, removing the need for almost any free hand work.

There are no alternative components within the kit. Unless you count the optional fat thing with wings. The arms are separate but doing any sort of decent looking conversions will be beyond many. I’m also not sure why anyone would want to. Librarians are about powers not weapons. Still I would rather have had an alternative head than the fat flying cherub baby thing.

Rules wise this Model isn’t going to be better than any other librarian. You may like the fact it doesn’t carry another weapon, but you might consider that an issue.

Then we get to the price, again it’s £18 yes £18! For that much you could buy Tigarius or two finecast librarians. So unless you are desperate for one more librarian pose and don’t like any of the other out of production models on ebay, or you just love the pose or hate finecast I can’t see you need to buy this.

That said this is the only plastic librarian in GW’s range. So it may end up in independent retailers, and remain in GW stores long term unlike a finecast releases, given the model a good reason to exist.

Over all. It’s a nice model and if you really like it get it, but there are plenty of other you could get for less

Next we will look at the new Chaplain model.

Again this is a need for this for this model, but only because there isn’t another plastic Chaplain for the Space Marines. I like to say with the exception of the head I love this model, however it kills the model for me. The good news is there is an alternative head provided.  Just like the Captain model the detail on this model is outstanding.

Other that the head there are no alternative components within the kit. However the pistol  arm is separate and a simple pistol swap would be very easy.

Rules wise this Model is going to be the same as any other Chaplain.

Then we get to the price, while you may be expecting me to say it’s £18 yes £18! No it’s not it’s £55 YES £55. But you do get a free command squad and Razor back included. Still unless you already wanted a razor back and the command squad you would have to really really want this model to buy it. I guess you could think of it as some sort of loyalty bonus. You buy a razor back and command squad and get a plastic chaplain for an extra £9.50 which is almost half the price of the Captain and Librarian.

No sorry I can’t see the point of this one. It’s not needed, it’s doesn’t look better than the others, it doesn’t have better rules than the others, it not more accessible that the others, there no apocalypse formation that you need another chaplain for and there are nine others in the GW range.

Could this be the worse release GW have done for 6th edition? I’ll be looking at the Tactical Squad next.