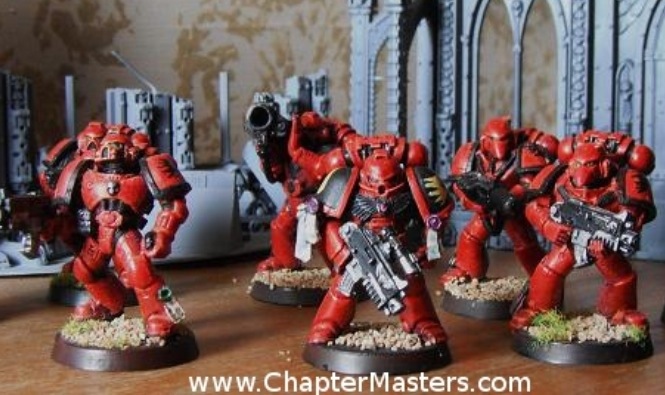 Retraction: There were rumours on Naftka that Blood Angels were on the cover of the new Warhammer 40,000 rulebook. This will came as no surprise to many given they are also rumoured to be in the box set, however this did give credibility to the rumour about the box sets contents.

Blood Angels represent my personal favourite era of 40k. Although there’s nothing much Grim and dark about bright red space marines. Blood Angels were the main Studio army when I started playing in 1991. My own efforts to start a Blood Angels force have never really got far, but they are still one of my favourite armies to see in the pages of White Dwarf. I expect we are about to see a lot of that.

A few of my Blood Angels, more can be found in the Imperial Menu above.

Unfortunately again the rumour were false. Maybe this was the cover of the 40k box set rather than the book.

This post is also the 400th on ChapterMasters. Thanks to all those regular readers who keep coming back and checking the site. I wouldn’t be doing this if it wasn’t for you.