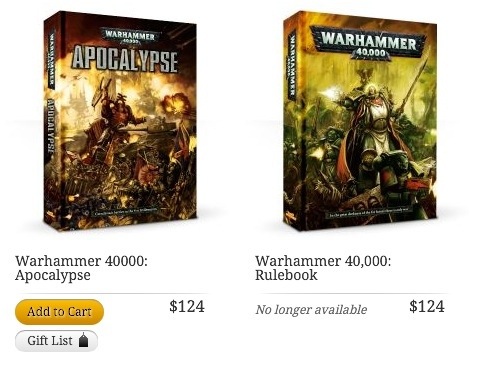 Retailers across the globe are reporting the core 6th edition Rulebook has been withdrawn from sale. Both US and Australian web stores list the book as no longer available.
If a 40k rule book’s success is measured by it’s longevity then 6th edition was an abject failure. Assuming the rumour published on bell of lost souls is correct. The 7th edition book will be up for preorder on the 24th May and should hit the shelves on the 31st of May. Sixth edition will therefore not have latest 2 years. Making it the shortest ever edition of 40k.
While this short shelf life may hint at a very bad rule set, the truth is far from it. Sixth edition was probably the best core rule set GW have produced. The problems came from expansions and codex releases. The more likely cause of this release is Games Workshop’s stock taking a huge fall earlier in 2014. GW need a cash cow and they need it now. Their best hope appears to be encouraging every player of their best selling system to buy a new copy of the rule book; two years earlier than expected.
Of course the question Games Workshop’s existing 40k customers may be asking is, will they or even do they need to buy it?

There has been a deathly silence on a date for Games Day, which had been announced by this point in 2013.