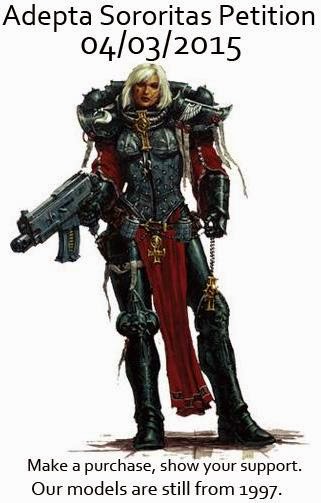 The day has come when we find out if the Sisters of Battle community really want new models?  For years players have complained their models are from 1997, but Games Workshop don’t believe they do. At least not as much as every other army they have released over the last 17 years. Well Tony has decided he should prove the models would sell.

From Tony on DakkaDakka

On the 4th of March 2015, i would kindly ask that you purchase THIS MODEL.
You may select an alternative, such as THIS or THIS.

If you have got involved with Sisters of Battle March Forth Day, please indicate your involvement below.

Have you ordered a Sister of Battle on March 4th 2015