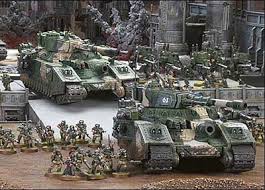 Pictures of the July White Dwarf have already hit the net. We can’t show you them here as ChapterMasters.com does not post pictures before publication dates.

We can say July will see the release of a replacement Apocalypse expansion.

The release will contain

The rumours indicate that all races except Orks and Guard will get a super heavy kits. I imagine the imperials are getting one kit, possible the rumoured Titan Knight, rather than Each Space Marine chapter and Sisters of Battle having there own kit.

Looks simular to this, only the head and arms are smaller and it’s on tracks not wheels.

The new Games Workshop kit looks similar to the standard Monolith, but features two beetle shaped objects on the side walls and it opens by separating down the middle on every side rather than having a door.